DNA evidence on rope traces woman’s murder to late husband A body found in the Utah desert in April 1998 was identified 20 years later as Lina Reyes Geddes, 37, of Ohio. (NCD)

GARFIELD COUNTY, Utah — Utah investigators last week named an Ohio businessman who died by suicide in 2001 as the person responsible for the death of his wife, whose body was found dumped in the desert in 1998.

The body of Lina Reyes Izaguirre Geddes, 37, of Youngstown, had been covered with plastic bags, wrapped in duct tape, tied with rope and placed inside a sleeping bag, before being wrapped in a carpet, according to Utah Department of Public Safety officials.

Reyes Geddes, who for 20 years became known only as the “Maidenwater victim,” had been shot in the head. The Salt Lake Tribune reported that the tips of her fingers and thumbs had also been cut off, likely to impede identification.

The slain woman was identified in 2018, but it took four more years of investigation for authorities to name Reyes Geddes’ husband, Edward Geddes, as her alleged killer. Geddes died by his own hand 21 years ago in Nevada.

“To have this answer finally after 24 years is incredible,” DPS Agent Brian Davis said, according to the Deseret News.

Reyes Geddes’ sister, Lucero Reyes, said in 2019 that she was grateful to the state of Utah for finding her sister, whose body she retrieved at that time. She said the thing she most longed for was to find her sister and bring her home.

“I felt like for 20 years no one would listen to me, but now I know what happened,” Reyes said. “I’m here to bring her home; not like I expected, but I’m bringing her back home with me.”

A wait for answers

Reyes Geddes, a native of a small Mexican town, was an accomplished ballet dancer, according to detectives. She also had a degree in international business.

She and Geddes met in New Mexico in 1996. Six months into the relationship, they married and moved to Toledo.

Two years later, she was dead.

Reyes Geddes had left the couple’s home for Laredo, Texas, where she planned to visit family. She never arrived, and she was never seen alive again.

Geddes failed to report his wife missing, but her concerned family called the police in Ohio, authorities said.

When questioned about his missing wife in October 1998, Geddes told state investigators that he last saw her when he dropped her off at the airport in Pittsburgh on April 8, 1998. She carried a suitcase, a cosmetics case and a blue sleeping bag that he said was supposed to be a gift for a young cousin.

They kissed as he bid her goodbye outside the airport, Geddes said in a videotaped interview.

“That was the last time I saw her,” he said.

Watch part of that interview below.

On April 20, 1998, passersby traveling down the two-laned Utah Highway 276 stumbled upon an odd sight at Maidenwater Spring, located about 38 miles north of Lake Powell, Utah.

“They saw something that looked suspicious to them,” Davis said in a video on the case. “So they stopped, and they walked over. And that’s when they discovered that it was a body. They called the police at that point.”

The body was wrapped in a children’s rug, which had a design of houses and roadways on which children could play. The woman, whose face was still identifiable, had been swathed in multiple layers of plastic, then wrapped in duct tape and placed in a sleeping bag before being bound inside the rug.

According to a 1998 news release, the woman was described as having multiple dental restorations, freckles on her face, tattooed eyebrows and several small moles, including a distinctive mole on her right ear. She was believed to be Hispanic or Native American.

The case grew cold over the years, though authorities did have their suspects. Top on the list was Scott Lee Kimball, a serial killer responsible for at least four murders but suspected in as many as 21 deaths.

A 2017 warrant for Kimball’s DNA pointed out similarities between his known murders and that of the Maidenwater victim, including the use of a rug in disposing of the woman’s body.

Kimball had been in Utah for a family reunion in 1998 and claimed to have killed a hitchhiker about 10 miles from where the then-unidentified woman was found. Kimball denied involvement in the Maidenwater case and was later ruled out as a suspect.

The dead woman’s identity was solved in 2018 after Utah authorities released a postmortem photo of her face. That same week, police in Youngstown who were updating their missing persons cases obtained a photo of Reyes Geddes from the U.S. Department of Homeland Security.

They released the photo and days later, a woman in California who dabbles in true crime was researching the Reyes Geddes case. As she did so, she came upon Utah authorities’ photo of their unidentified dead woman, along with a description of the body.

Watch a police video on the case below.

The amateur sleuth noted the mole on the upper arch of the slain woman’s ear. In the photo of Reyes Geddes, a mole is visible in the same spot.

Based on the woman’s hunch, Utah and Ohio authorities put out new information in Texas, hoping to find family members of Reyes Geddes, the Tribune reported.

Her sister, who was just 11 years old when Reyes Geddes vanished, called authorities.

Lucero Reyes traveled over 300 miles to Monterrey, to the U.S. Consulate nearest to the family’s home in San Luis Potosi, so authorities could obtain a sample of her DNA. The genetic material proved that the Maidenwater Jane Doe was her missing sister. 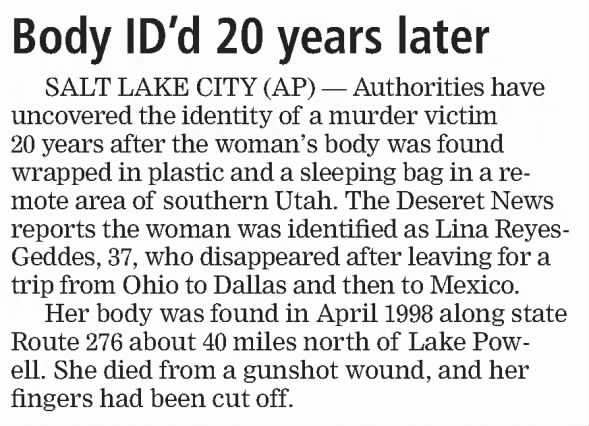 The identification of Reyes Geddes’ body opened multiple new investigative doors for detectives. According to the Tribune, people in Ohio who had known Geddes came forward with what the detective described as circumstantial “red flags.”

Reyes Geddes’ family had long suspected that he was responsible for her disappearance but could not prove it, Davis said.

Investigators began working with forensic specialists to find genetic evidence on the rope that had been used to bind the victim’s body. WKBN in Youngstown reported that a Utah crime scene expert used an M-Vac, a device similar to a Shop Vac, to extract DNA from the surface of the rope.

DNA from two men was found on the rope, according to DPS officials. Further testing determined that one genetic profile belonged to a knot expert detectives had consulted in the case, WKBN reported.

Though he had been cremated after his death, detectives were able to get Geddes’ DNA samples from two willing family members. They got DNA from Geddes’ son with the aid of a search warrant, the news station reported.

The familial DNA proved the second profile belonged to Geddes.

Davis said the case was an emotional one for him and his counterpart in Ohio, Youngstown police Detective Sgt. David Sweeney.

“These cases are very difficult. They’re tough, and they can be very disappointing, because they hit a lot more dead ends than successes,” Davis said.

He said solving a case is worth the difficulty.

“When you do get something like this, it’s worth all of the bad stuff, all the hard stuff,” Davis said.