SUNNYVALE, Calif. — A Hawaii man suspected of raping a 15-year-old girl before stabbing her 59 times in 1982 was arrested at his home this week and charged with the 40-year-old murder.

Gary Gene Ramirez, 75, of Maui, is charged with murder, kidnapping and rape in the death of Karen Ann Stitt, of Palo Alto. Stitt, who had taken a bus to Sunnyvale on Sept. 2, 1982, to visit her boyfriend, was found raped and murdered next to a nearby business the next morning.

Though the boyfriend, David Woods, was an early suspect, authorities made no arrests in the brutal slaying. Woods was eventually ruled out as the killer in the early 2000s when DNA evidence proved him innocent, authorities said.

In early 2019, Sunnydale police Detective Matt Hutchinson received a tip that Stitt’s killer was one of four brothers from Fresno. Following an investigation that looked at all four brothers, one of the men, Ramirez, was identified as a suspect.

Cold case detectives linked Ramirez to the girl’s murder through DNA from blood and semen found at the scene. 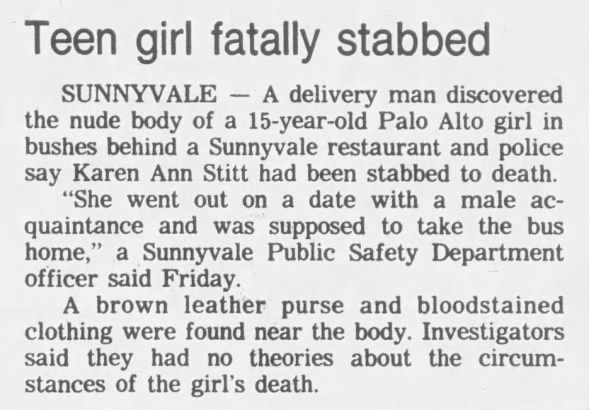 Ramirez was arrested at his home in the town of Makawao on Maui. The Mercury News reported that authorities said Ramirez appeared shocked when they arrived to arrest him.

“Oh my gosh,” Ramirez said as he was handcuffed.

Ramirez has no prior criminal record, and his older brother told the News that he could not imagine his brother committing a violent crime.

“I’ve never seen him violent or get angry ever,” Rudy Ramirez said. “He wouldn’t hurt a fly.”

75 year old Gary Gene Ramirez has been arrested in connection with the 1982 cold case homicide of 15 year old Karen Stitt.

Cold case detectives allege that the DNA from blood and semen found at the murder scene tells a different story. After a tip led investigators to look at Ramirez’s family, DNA from one of Ramirez’s children pointed them further in the right direction, according to authorities.

Stitt’s father and older sister have died in the four decades since her murder, never knowing who killed her, the News reported. An aunt in Tampa wept as she thanked law enforcement officers and prosecutors for seeing the case through.

“Thank you,” Robin Stitt Morris said. “Thank you for not giving up.”

“Behind every old murder file in every major police department, there is a person, heartbreak, and a mystery,” Rosen said. “The mystery of Karen Stitt’s death has been solved thanks to advances in forensic science and a detective that would never, ever give up.”

The case began with a 10-mile bus ride from Palo Alto.

According to a criminal complaint, Stitt left her home the evening of Sept. 2, 1982, to visit Woods, who met her at a 7-11 convenience store near the bus station at the intersection of E. El Camino Real and Wolfe Road. The couple got drinks and walked to a nearby miniature golf course before heading to Ponderosa Elementary School, where they hung out for a while.

Around midnight, Woods walked Stitt back to the area of the 7-11 so she could catch a bus home. Woods, then 17, later told police he had to leave so he would not get in trouble with his parents for coming home late.

Later that morning, a truck driver making a delivery to the Woolworth Garden Center, located about 100 yards from the bus stop, discovered Stitt’s nude body lying in the bushes at the base of a cinder block retaining wall along the business’ driveway.

The teen’s wrists were bound behind her back with her own shirt, according to the court document. Her jacket was tied around her left ankle.

The killer had left a bloodstain on the cinder block wall above Stitt’s body.

Stitt’s autopsy showed that she had been sexually assaulted and stabbed 59 times in the neck, chest, abdomen and back.

The case soon went cold and stayed that way for nearly 20 years. In 2000, advances in DNA technology allowed authorities to develop a genetic profile of Stitt’s killer.

They were also able to take Woods’ name off the list of suspects.

The DNA profile from the semen and blood, which was found on the cinder block wall and Stitt’s jacket, was entered into the FBI’s Combined DNA Index System, or CODIS, but there was no match.

A tip leads to an alleged killer

Hutchinson wrote in an affidavit that he received a tip in 2021 that one of the four Ramirez brothers may have killed Stitt. He began looking through public databases for information on the brothers’ mother, who he discovered had lived in Fresno as early as 1950.

Fresno is about 160 miles from Sunnyvale.

Census and birth records showed that Rose Aguilera Ramirez, who died in 2012, and her husband had four sons, including Rudy and Gary Ramirez. Hutchinson also discovered both parents’ obituaries, which listed two of their grandchildren.

Over the course of several months, the cold case detective was able to eliminate as suspects two of the brothers, including Rudy Ramirez. According to the affidavit, he was unable to conclusively eliminate the third brother, so he began trying to eliminate Gary Ramirez.

That process began with one of Rose Ramirez’s grandchildren, who Hutchinson located on social media. That grandchild was fathered by Gary Ramirez.

In April, Hutchinson obtained a DNA sample from Ramirez’s child, who was not named in the affidavit. The crime lab determined that there was “very strong statistical support” that the DNA from the Stitt crime scene matched that of the child’s father.

According to Santa Clara County officials, that DNA match was confirmed last week through a buccal swab of Gary Ramirez’s mouth.

Detectives learned that Ramirez grew up in Fresno with his brothers. Their father worked as a heavy equipment operator for the county.

Read the criminal complaint against Gary Ramirez below.

Rudy Ramirez told the News that he and his brothers grew up in a middle-class “dysfunctional family” in which Gary Ramirez was the “favorite son.”

“He wasn’t like some violent kid or dysfunctional juvenile delinquent,” Rudy Ramirez said.

Rudy Ramirez moved to Maui at 18. His brother, who is four years younger than him, joined the U.S. Air Force.

The brothers lost touch for a few years, including the time frame in which Stitt was slain. Gary Ramirez was 35 in 1982.

In the late 1980s, the accused killer was living with his mother in Fresno. Rudy Ramirez suggested his younger brother join him in Hawaii, the News reported.

Gary Ramirez has lived there since, marrying twice and fathering two daughters, his brother said. It was DNA from one of those daughters that helped Hutchinson crack the case.

Ramirez has waived extradition and will be moved back to California to await trial.

The arrest has brought a measure of relief to Stitt’s remaining loved ones.

Woods, now in his 50s, told the News that he has lived with the guilt of leaving Stitt alone that fateful night.

“For 40 years I have suffered heartache from the horrific loss of a beautiful girl whom I was falling in love with,” Woods said in an email to the newspaper. “I hope this brings some closure for her family, myself and her other loved ones.”